When I travel to the emerging world, (more often than not on my sojourns), I like to take advantage of my “spending power”. While I’m not buying diamond rings and Louis Vuitton neckties (stuff like that costs more in third world countries anyways), I do try and purchase other things that I would normally shell out for in America like eye glasses, custom-made clothes and instruments.

Hand-made, custom shirts I got made in Thailand for $45 total!

I really discovered this truth when I was in Mexico last year for a Radiohead concert. I had been recently disappointed when I headed to a LensCrafters in Miami (chain glasses store in America) and found out my new pair would come out to over $400 with the upgraded lenses. I decided that was just too much for what I was getting and left disheartened and still blind.

Well, the next week when I was strolling the streets of Mexico City and saw a whole strip of eyeglasses stores, I popped into one, found two pairs I liked more than anything I saw in the states, got a free eye exam and upgraded lenses for $90 total, Bam!

From that point on, any place I travel, I hold out on buying stuff I need (well usually more want) until I can get overseas and snag it at fraction of the price. One of those superfluous items this time was a new acoustic guitar.

I have been playing the same Fender acoustic for the past 12 years. And while it has done me right, the bridge snapped off a few years back in which I semi-successfully reattached it with super glue.  Don’t get me wrong, it still sounds pretty good, but its got more dings and dents than my late grandfather’s Carolla.

So on my recent trip to the Philippines, I had read a bit online that there was a community of master guitar makers living on Mactan Island (connected to the major island of Cebu) and that I could buy a completely hand-made guitar crafted of exotic woods for a fraction of the cost as in America. I was intrigued, so I did a bit more research.

The history of why this little enclave of guitar makers exists traces back hundreds of years to when the first Spanish colonists (including guitar-playing friars) landed on Cebu and Mactan island (Ferdinand Magellan was actually killed by a local chieftain, Lapu-Lapu on Mactan).

After many months at sea, and surely countless mugs of ale, you can be sure that any instruments the Spanish had were missing a few strings and could use a little TLC. Upon making landfall, the friars showed the local islanders their guitarras (called gitaras now in Tagalog, the language of The Philippines) and what they needed to fix them. From that point on, the locals became enamored with the instrument and learned to make them themselves. The same families have been crafting, repairing and enjoying guitars ever since and can trace back their roots to the original islanders who first learned from the friars.

While there are many guitar stores in Cebu City and Mactan island trying to cash in on the guitar hype, many of them purchase their inventory from the real McCoys located deep in the center of the island. I had a local friend take me to the main drag (it’s a dirt road) where the primary workshops and stores are (I’ve included a map at the bottom if this post if you want to find it yourself). The street is known by most locals and has a huge sculpture of a guitar at the beginning, so it’s pretty hard to miss.

My quest for the perfect guitar at Alegre Guitars. 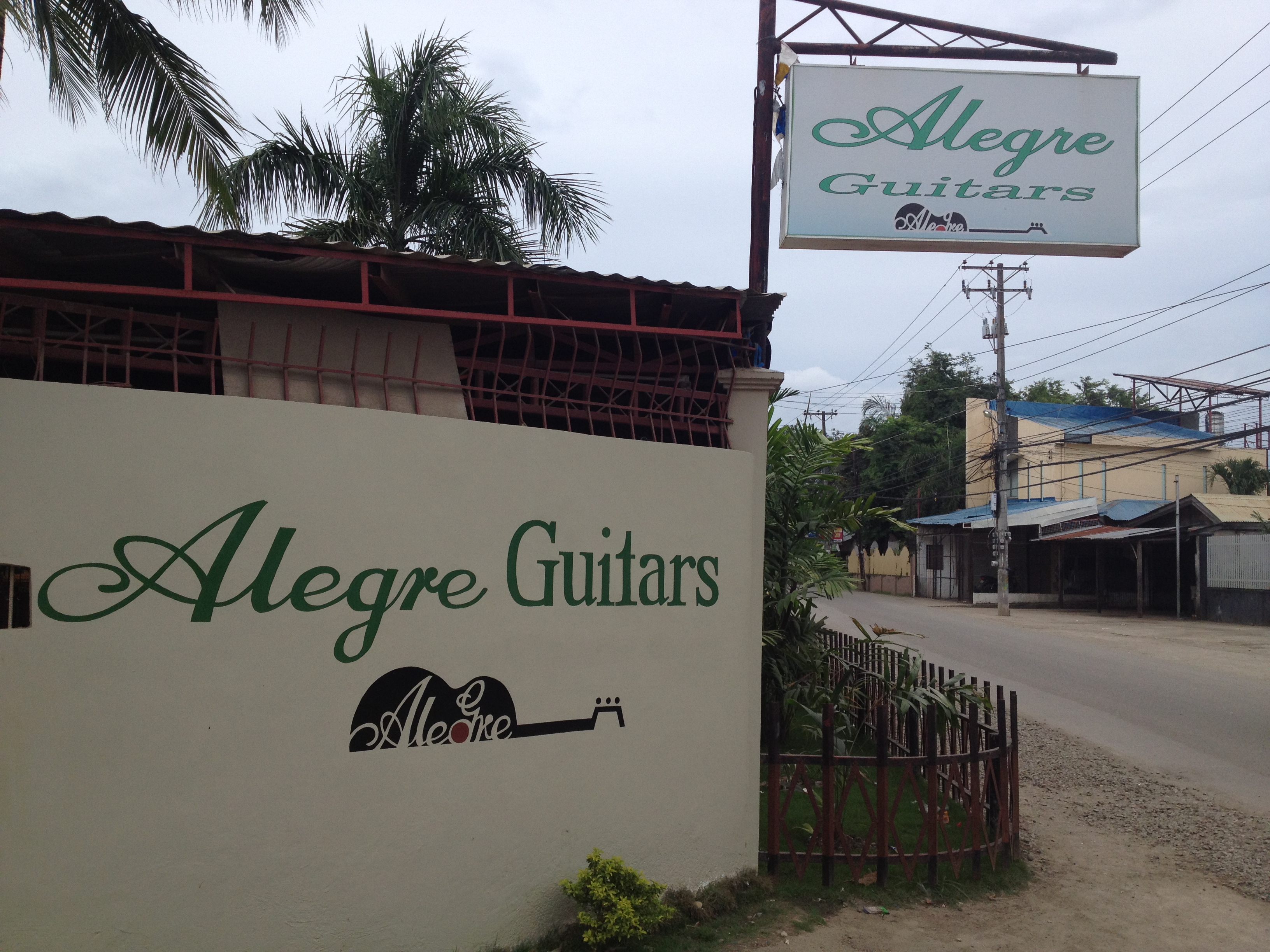 Alegre is probably the most well known of the shops and claims it was founded by descendants of the original guitar makers of Cebu. It is probably the nicest building in five square miles (goes to show you how much a few foreign dollars spent will go in the Philippines) and has an open workshop that you can observe the little Filipino guitar elves at work. 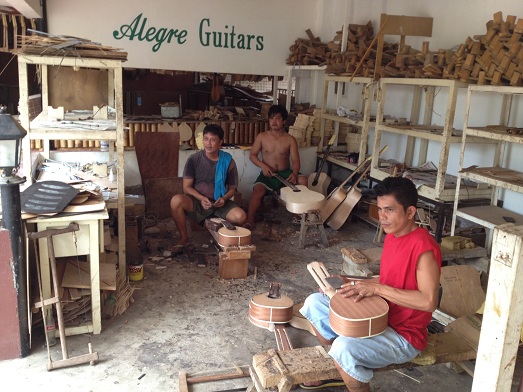 The Workshop at Alegre

While I began to negotiate on a guitar I liked at Alegre, their prices are way inflated and comparable to anything you’d find in the western world. Next!

I then crossed the street to check out Susing’s Guitar, probably the 2nd most popular shop. They too had a nice compound and showroom. I found a guitar I really liked at Susing’s (also descendants from one of the original guitar making families), but once again, the sales rep wasn’t really interested in negotiating too much, nor could he enlighten me on to how to ship a guitar back to the US. Fart noise.

So once again I hit the road, and stopped at one last place, Jerry’s. While Jerry’s was nothing too impressive from the outside, and sounds more like a dirty diner in Jersey, it had quite a nice inventory of acoustic guitars and ukuleles. After chatting up Jerry himself, he informed me that basically everyone who owned a guitar shop on the street was a relative, including his cousins over at Alegre and Susing’s. Straight guitar mafia…

He told me that his guitars actually come from the workshop over at Susing’s, which looked apparent to me as well so I figured Jerry’s might be just the right place to finally make my purchase. 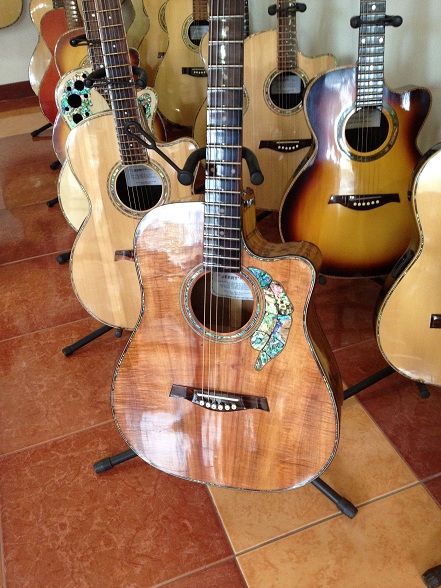 Some of the selection at Jerry’s

I tinkered around for about an hour until I found one that sounded and looked great and we began some serious negotiating.

He started around $500 but I got him down to $350 with a hard case. He even drove me to the ATM to take out the money (ya, definitely no credit cards at this place). I had a friend then ship the guitar back to me which only took about two weeks and cost around $120 (it got back in one piece too!).

The one I chose was made of Koa wood imported from Hawaii. Everything was hand-made, including the mother of pearl pick guard and inlay around the outside of the guitar. I chose it because I think it will look just as good hanging on my wall as it will sound playing on my couch. While it took a bit more work than heading to my local Guitar Center at the strip mall, I think I did pretty well and a lot of fun in the process. 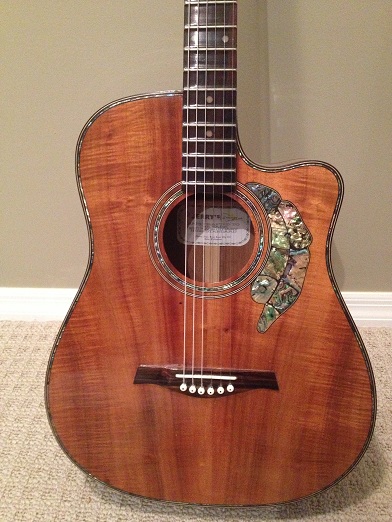 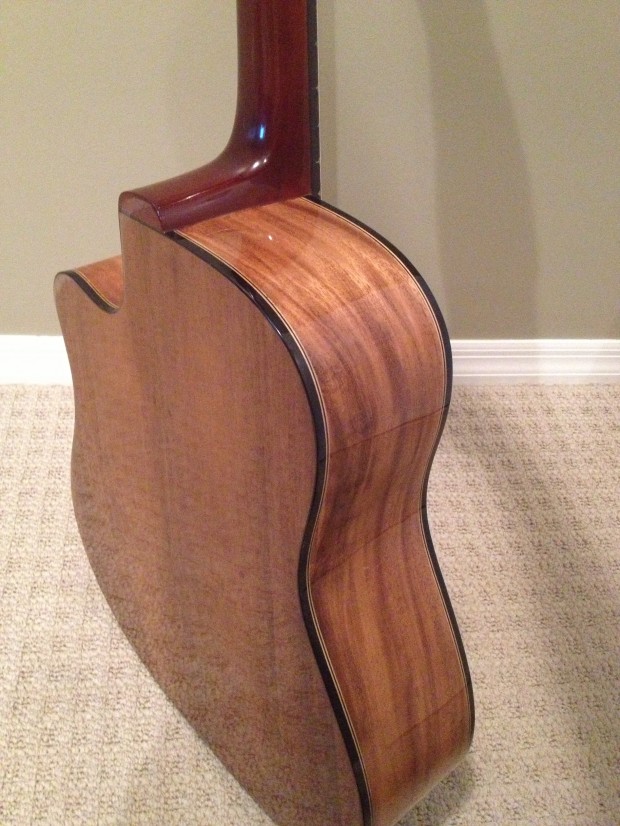 * Here is a map of where you can find the guitar shops on Mactan Island (20 minute drive from Cebu City and right behind the airport). 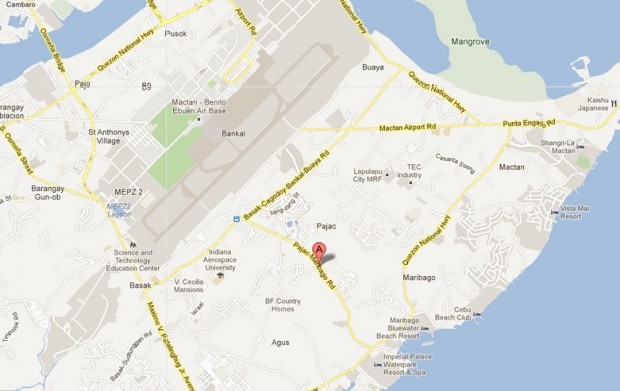 Bacolod for the Budget Traveler: 4 Thrifty Ways to Enjoy the City of Smiles
Ridin' Hogs in Bohol, Philippines
Hanging Ten in Baler Beach, The Philippines!
Be Sociable, Share!