I like tattoos. Always have. So much in fact that I didn’t even wait one day after my 18th birthday to hop on a train with my friend Jooce (yup, we actually call him that) from Philly to NYC to get one.

Well, we really went up there to get Fake I.D’s which we accomplished as well, but I knew why I was truly going up there (even if Jooce didn’t). I wanted one so badly that I didn’t even take recommendations from anyone, and I just walked right to the first place I found, paid the guy a hundred bucks and he put my family crest on my right shoulder. It was a tasteful design, but lets just say it didn’t end up like the picture, and I still have a pretty shit tattoo, but, you live and learn…right? :S

I waited a whole year to even consider getting another one. This time, I wanted something on my leg right before going away to college so that I’d be the coolest freshman there (which I obviously was). Instead of just being a “yes man”, I opted to visit a more reputable tattoo parlor in Philadelphia, Kadillac Tattoo, in the Manyunk section of the city. It was so “legit” that I had to go in twice before they even inked me up to drop off my design, have the artist get the mock up ready for my approval and then finally the big day. It came out great with lines so crisp, you could use them as a ruler.

After my first two tattoos, my desire for new tatty tats went dormant as I often forgot I even had them or couldn’t think of anything meaningful that I’d want to bury it under my skin until it decomposed off of my rotting bones (sorry got a little into that one). That was until my recent trip to Asia.

Throughout my trip, I really felt good about everything that was happening. New experiences, complete self-reliance, living by my own rules, you know, renegade shit that makes you want to get a tattoo.

I remembered a painting I had done a couple years ago that still hangs in my living room and I thought, “wow, that would make for a perfect tattoo” – something to live by, something to look down at and go, “yup, every day son”. It says this: 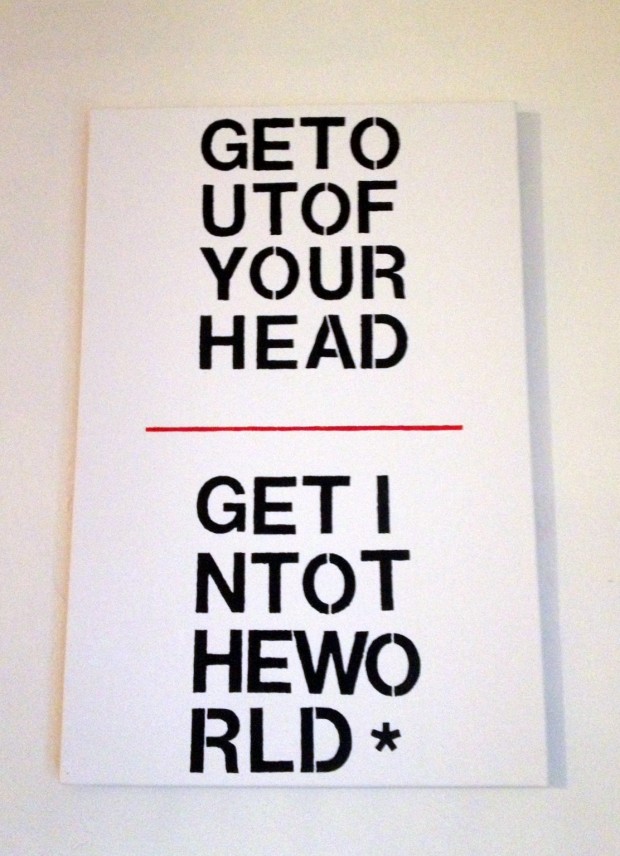 Being that I have made a living out of traveling, I thought it would  be the perfect, self-inflicted indelible mark to say a respectable, “Fuck You Corporate America!”. Coffee shop warrior fo’ life!

So, instead of opting to have my tattoo done in Asia (that’s my 25 year old judgement kicking in), I waited until I got back to the city of my birth and site of my last tattoo to get it done up. Six years later since the last one, and with the rise of online reviews dictating much of our off-screen decisions, I opted to search Yelp this time to see where might be the “best place in Philadelphia” to get a tattoo (Kadillac was too far from where I was staying).

A few options came up, but I found one called Body Graphics that had great reviews, and I decided to give them a call. The guy who picked up was super friendly, happy to answer all of my questions, and the next thing I knew, I was walking down 2nd St. in the Olde City neighborhood right up to the door. 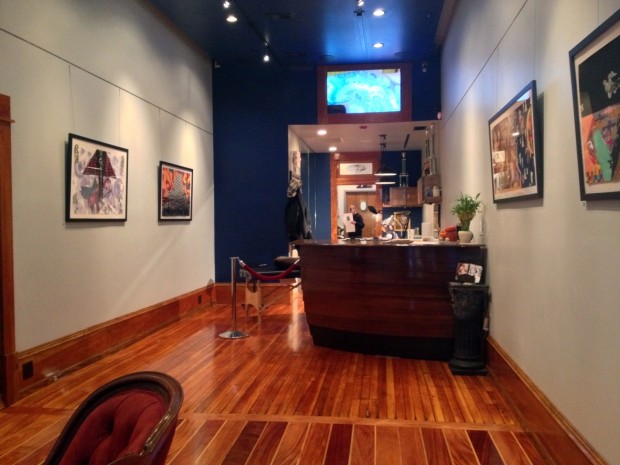 I liked how the studio was modern, and not some dingy-ass biker place using rusty sailor’s needles. I met with the guy who I talked to on the phone, and he helped me go over the design which I had replicated on Microsoft Word. He got the stencil ready on the spot, we checked it 10 times over and then he introduced me to Scott, the tattoo artist.

Click. ZZZZZZZZZZZZZZZZZZZZZZZZZZZZ. “Oh shit”, I thought, “what have I gotten myself into?”  Scott grabbed my arm with a firm grip and then pressed down on it with his other arm as he said, “you ready?”. I gave a futile thumbs up as I felt the needle begin to pierce my baby soft skin, FUCKKKKK. It hurt a lot more than I had remembered, maybe because it was on the inside of my arm, but thank god after a little while, the skin went numb and I didn’t feel much. 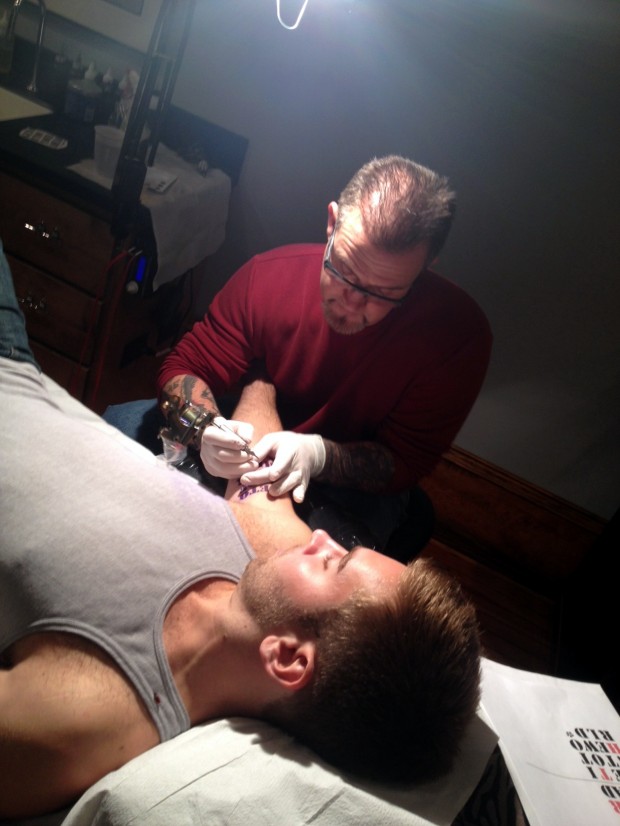 He first outlined all of the letters on one arm, filled them in and then did the same on the other arm. All in all, it took about 4 hours, cost me $575, but I was very happy with the outcome. Here’s what it looked like right after he finished (the red letters actually spell, “Go Forth”). 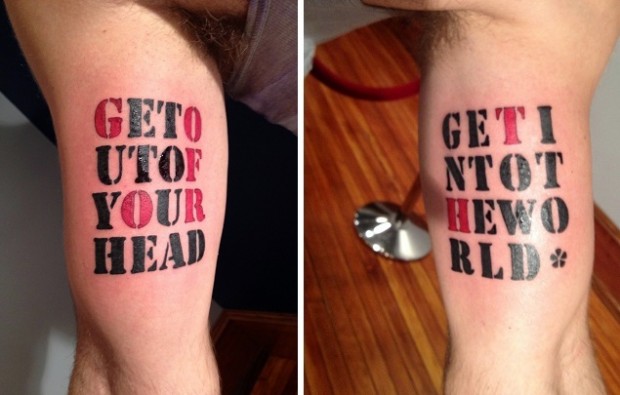 And here they are all healed up a few weeks later! 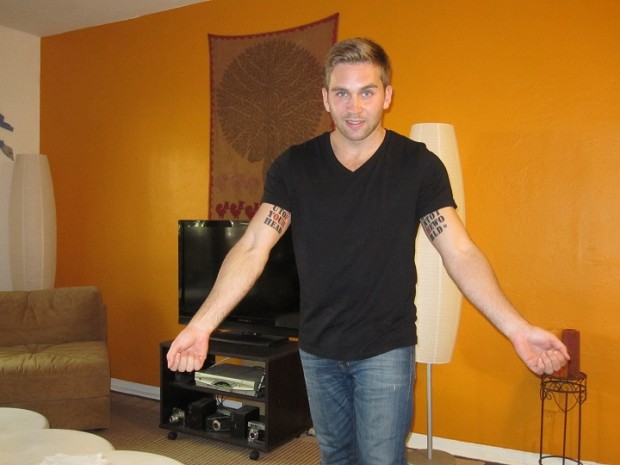 I like my new tattoos thoroughly and I get a lot of people asking what they say all the time. When I explain to them (and what I do), Most people like the message. It also gives me a segue into, “Hey, you should check out my website”. Gotta get creative in generating traffic these days, right?