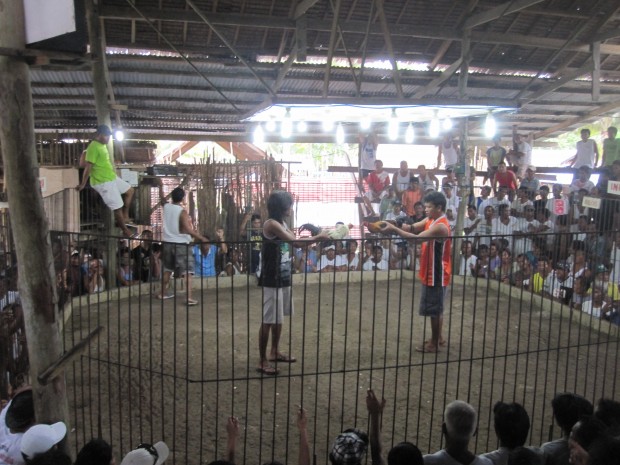 The ash from my cigarette fell between my legs as I wiped the beading sweat from my brow. I thought to myself, “it must be 110 degrees in here” as I sipped my warming beer for a little relief from the blanketing humidity.

I looked out around the cockpit at the local Filipinos chit chatting with one another, eating oiled peanuts and most definitely arguing who they thought was going to be the big ticket bird that day. I asked the guy next to me when he thought the first fight would start and he said once the first two cocks are matched and fitted with blades outside, they’ll bring them in and the rest of the spectators will follow. 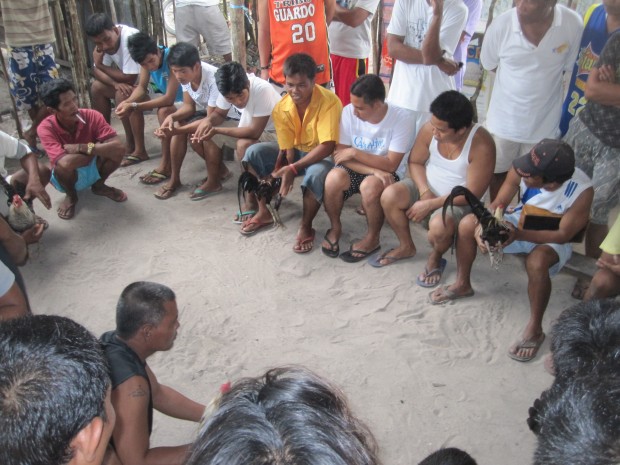 Matching cocks by size before the fights

It was Sunday, cock fighting day in The Philippines. A day that proud locals bring their prized roosters from the local towns and villages to do battle with the hopes of earning a few extra pesos.

I personally didn’t even know cock fighting was legal anywhere in the world anymore, well, the western world at least (where it most definitely isn’t). A local guy told me I should come check it out on Sunday, and while I don’t really believe in forcing animals to fight to the death (especially for gambling purposes), I figured I could pardon myself just this once under the excuse of “experiencing new cultures”… It was fucking awesome.

The cocks used are not trained to fight before a match, but rather injected with steroids which makes them extra aggressive (ya pretty messed up).

The betting system is pretty complicated at first glance, and from what I could gather from the guy’s sitting next to me is that there are two ways to place a bet. The first option is to bet against the house via the Kristo who is a guy who stands in the middle of the cockpit before the fight and takes bets and remembers them all by memory! The second option is to put your hands up, start screaming, and then scan the bleachers for someone else to take your bet. You use hand signals for the amount you want to gamble, which bird you believe is the best and a head nod to lock up the deal. You then pay or collect from that person after each fight.

I had the guy next to me (as you can see in the video) bet 200 pesos (5 bucks) for me against a local across the cockpit. Of course I lost and had to pony up, but it made watching the fight pretty epic. While experiencing cock fighting in The Philippines was something I had to do, I can see why it’s illegal in most of the world and probably for good reason. At least the winner of each match gets the opponents cock which is almost always eaten for dinner, but, tough ass, steroid injected, non-free range chicken is probably the last thing I’d want to masticate, maybe besides maybe human c…

Best Travel Products You Need to Buy in 2020 Review
How to Make Your Vacation Memorable
Ridin' Hogs in Bohol, Philippines
Be Sociable, Share!