I’m no stranger to the hostel. Although I’m pushing a quarter century in the next couple of weeks, I still find hostels to be one of the best places to stay as a solo traveler, maybe just more in a private room these days than in the past.

My craziest travel experience begins where east meets west, in the ancient city of Istanbul, Turkey. I decided to make the 10 hour flight from Miami as it was always one of those places on my travel bucket list that has intrigued and attracted me.

My arrival into Atatürk International Airport was  flawless and my first couple of days were great, but it’s when I decided to check into the Moon Star Hostel in the Sultanahmet neighborhood (right behind the Blue Mosque and the Hagia Sofia) that things began to get weird, crazy and at the end scary.

My first few nights in Istanbul  were paid for by Wimdu, a travel booking site like Airbnb.com. I stayed in a little apartment which was clean, comfortable and my own, but after those few days,  I had to find a decent hostel nearby to stay and was disappointed that my top 3 choices were all booked out. I was left with one last place, Moon Star Hostel.

It was nothing special from the outside, and the rooms were definitely nothing great either, but it was cheap, had decent Wi-Fi and a rooftop common room with an amazing view of the Bosphorus which made me say, “screw it” as I reached for my wallet to pay the deposit.

My first night was fine and I slept well after a trip to the Turkish Bath House, but things starting heading south the following day when a rather beautiful Portuguese girl checked in.

I hadn’t even seen her yet when I walked in from the street and began chatting with the young kid working the reception. He was a friendly guy, about 23 years old and a local. He said, “lucky you, beautiful girl just check in and staying in your room”. Nonchalantly I replied, “Oh really?”, so I made my way back to the dorm room to pointlessly fuddle through my bag and see what this girl was all about.

I walked in and just saw her silhouette as the room was dimly lit by a small window.  She was wearing black leggings so I could just see the outline of her shapely legs. Her hair was jet black and cut in the style of Cleopatra with perfectly leveled bangs. I was definitely attracted to her.

We made small talk for a few minutes and I found out she was actually an au pair for a family about an hour away and she just came into the city for the weekend to check it out and have a good time. Winning.

We chatted for a little while longer and then I said I had to head out to get my laundry, but maybe I’d see her in the common room later for a drink.

I came back a couple hours later in the evening, and by this time, I saw the front desk kid with red eyes, like he’d been crying. I asked him what was wrong and he said the owners of the hostel had just been fighting and one actually pulled a knife on the other one. He said that he had to break it up and he was very upset over it. I noticed an open bottle of vodka next to him as well.

I really didn’t know what to say besides, “I’m sorry you had to deal with that” as I thought to myself, maybe this isn’t the best place to stay. I decided it was too late to try and find something else now so I headed to my room to freshen up for a hopeful night on the town and maybe even a chance with the Portuguese girl. 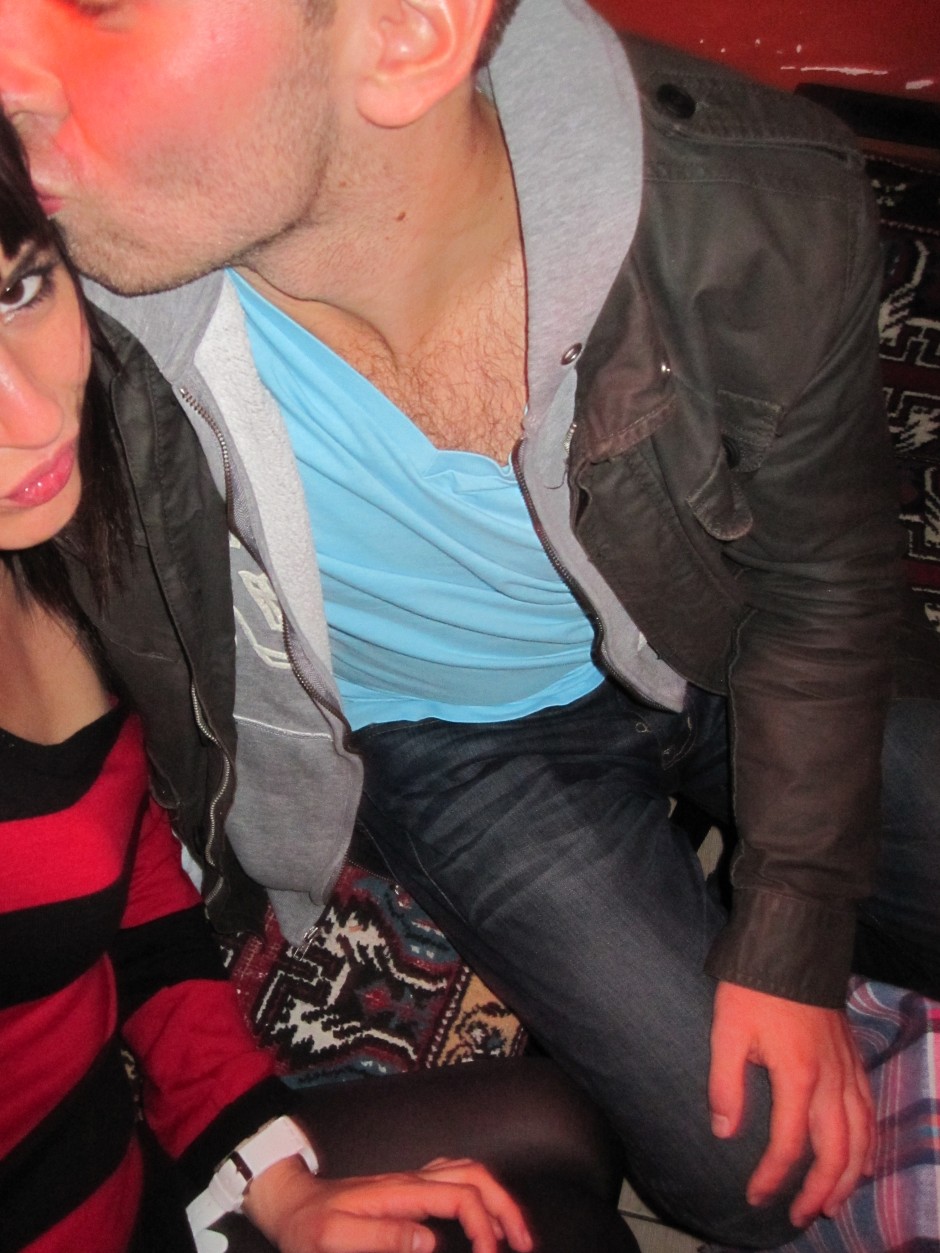 Me and The Portuguese Girl

The whole time I was getting ready, I could hear loud Turkish music, people singing and dancing upstairs in the common room, and I hurried myself to get up there to see what all the hoopla was about.

When I walked upstairs, there were about 5 or 6 Turkish guys, supposedly all staying at the hostel, and there was the Portuguese girl partying right along with them. The Turks brought some homemade wine and Raki, an anise flavored alcohol that tasted disgustingly similar to Ouzo. They welcomed me over to join them in which they continued to play wild Turkish songs on their ipod and wave their hands in the air exactly how you would imagine a bunch of Turkish guys would dance. It was a lot of fun. 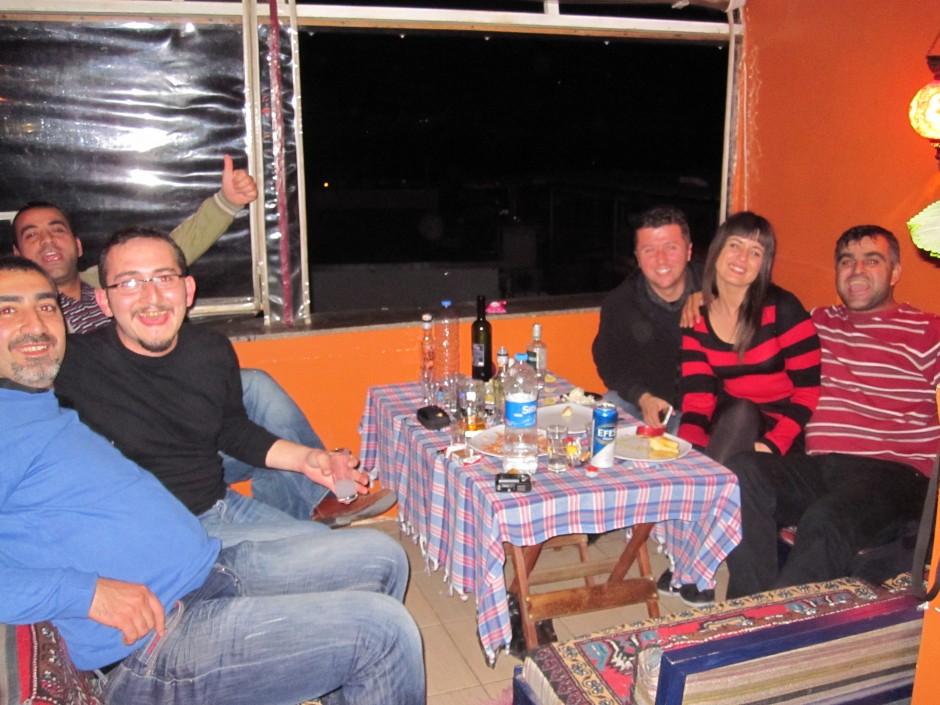 The Turkish Guys and the Portuguese Girl

We were up there for a solid 2 hours, just drinking Reki, eating feta cheese and olives and all trying to win over the Portuguese girl. By this point, she had been drinking for a long time and even mentioned she gets a bit crazy when she drinks (usually a good thing), but she was noticeably getting to the point of no return, and I suggested it might be a good idea for her to drink some water and lay off the alcohol for a little while.

She kept on putting them back and said she wanted to go to a club. I told her, “listen, we’re in the more religious part of Istanbul, it’s a Sunday night, there are no clubs to go to”. Basically I just didn’t want to have to babysit her outside of the hostel because she was in no state to be wandering around. She refused that idea and proceeded to head to the street with the Turkish guys. I kept saying it was a bad idea but she wasn’t having any of it.

They left and I went across the street to a bar that I had gone to the previous night for a couple more beers. About an hour passed, and I saw the Portuguese girl and Turkish guys through the window back in the street now outside the hostel, and now the reception kid had joined them, bottle of vodka in hand.

I headed back over to the hostel a little later to head to bed. The reception guy was at the desk listening to music and smoking cigarettes, noticeably intoxicated so I just said goodnight and headed upstairs.

I laid down, closed my eyes and knocked out.

I looked across the room and the Portuguese girl was pointing and yelling at one of the other people staying in the dorm, an Iranian guy, and she was saying he crawled into her bed and was trying to kiss her. I looked over at him and asked, “is that true?”

He said, “no, no that’s not what happened”. I walked over to him and asked again and he kept saying no, no no, and then he began to cry.

I began thinking to myself, what the hell is going on? This place is backwards.

She kept saying he was in her bed and then finally the Iranian guy said what had really happened.

He was awake in his bed listening to music when he saw the door open 20 minutes earlier. It was the kid at reception. He looked around the room and found the Portuguese girl’s bed and climbed in, pulled down his pants and tried to have sex with her, but she was so drunk she didn’t even realize.

I asked the Iranian guy, “well why the fuck didn’t you do anything about it if you saw it?” He couldn’t tell me why, and that he was just scared and didn’t know what to do, and one more chilling detail, the reception guy had a knife. After the reception guy left, the Iranian said he went over to her bed to try and get her to wash her face and then that’s when she woke up.

The Portuguese girl didn’t believe him, but then the Iranian guy said, “look!” He pointed to her bed, and there was the proof, the desk kid’s leather jacket sitting right on it. She shuttered and began cursing and apologizing to the Iranian guy. 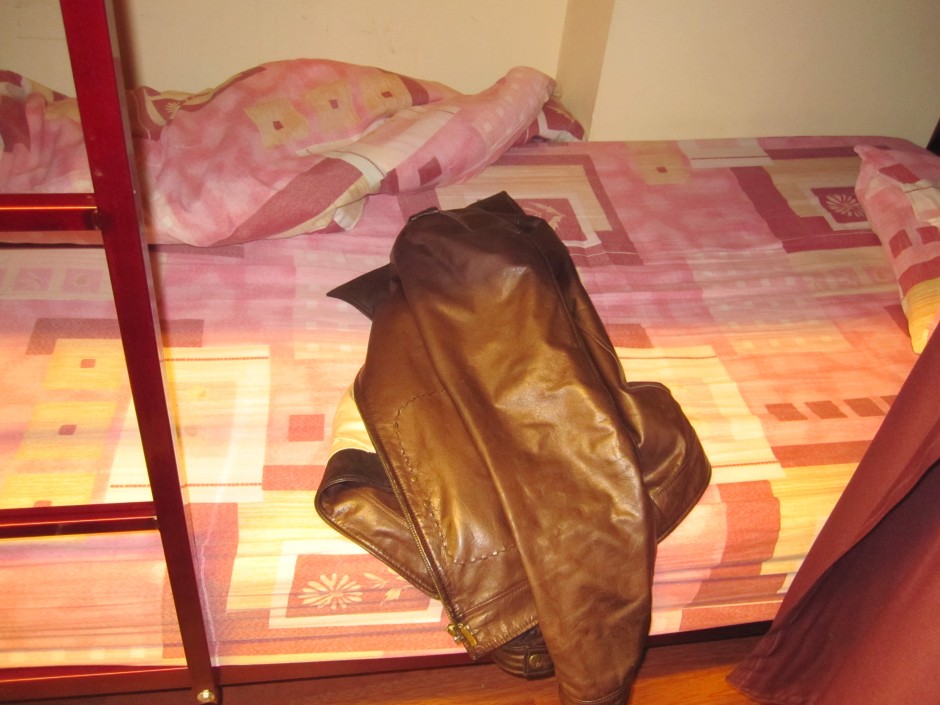 I took a picture of his coat for proof

After I helped calm them both down, I said, “pack your bags, we can’t stay here”, and then I mentally and physically psyched myself up for what I might have to deal with downstairs.

I wasn’t afraid that he would try anything on me because he liked me, and I had the feeling that because I was an American, he slightly feared me, which was not the same way he acted toward the Iranian guy.

We began walking down the stairs, and we could see the reception kid sleeping on the couch next to the desk. We tried to quietly walk towards the door to just slip out and be gone for good, but the door was locked. I sighed and said, “stay by the door” to the Portuguese girl and Iranian guy and walked over to the desk.

I saw the knife on a table, so I hid it in a drawer before I shook his shoulder.  I said, “wake up, we’re leaving, open the door”. He pretended to stay sleeping as he knew we were all down there. I did it again a little harder and said “wake up and open the door right now”, he slowly opened his eyes and acted like nothing was wrong. I said, “give me the key” and he said he didn’t know where it was. I said, “give me the fucking key right now before I break the door down” and he began searching for it. He actually couldn’t find it.

Not fearing for my life anymore, I confronted him as he looked for the key and asked, “were you in our room 30 minutes ago?”, he vehemently responded, with an offended, “no”. I asked him a few more times and stared him in the eyes. He began visibly getting upset and his voice started shaking. He knew what he had done.

I didn’t want to pursue it anymore to the point where he might try and attack me or the other two, so I kept saying find the key. He couldn’t find it, and then I saw his face drop. I didn’t immediately realize why, but when he went upstairs and came back down with his coat in hand, and pulled out the key from the pocket, I knew why he made that face. I snatched it out of his hand, opened the door got everyone out and threw it back inside at him. We were safe.

The sun was beginning to rise over the horizon as we stumbled onto the street. The Iranian guy was leaving in a few hours anyways so he caught a cab to the airport, and I thought it be best to send the Portuguese girl back to where she was living, so we walked to the bus station, she gave me a hug and a kiss on the cheek, said “obrigada” and climbed onto the bus.

I picked up my bags and started walking towards where I had seen some hotels the day before. On my way, I walked past the Blue Mosque in the still deserted city and thought to myself, “You should be proud of yourself”. 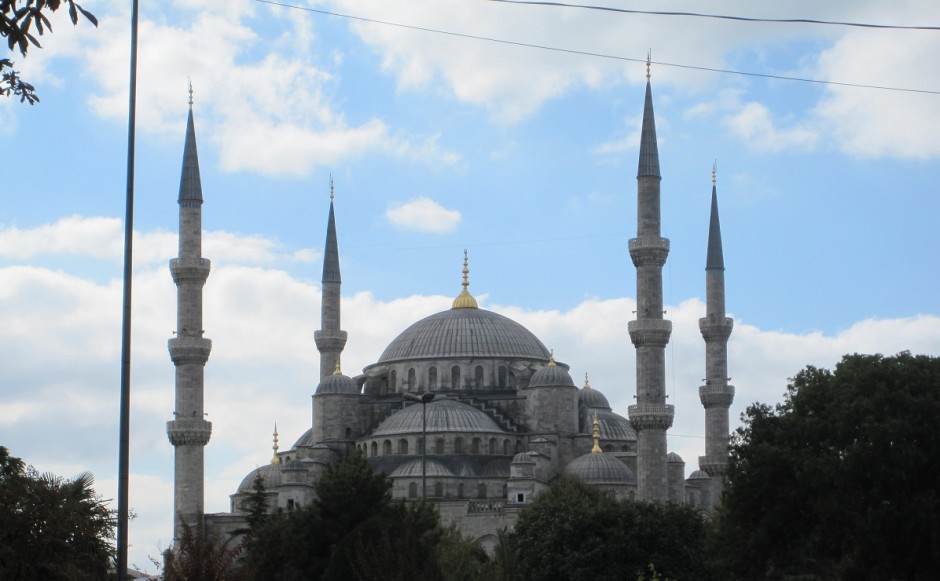 What has been the craziest thing you have experienced while traveling?

A guide to the Best Vineyards and Best Wineries in Europe
An Outdoor Enthusiast's Paradise: Icmeler, Turkey
The Top Rated Tourist Attractions in Istanbul
Be Sociable, Share!